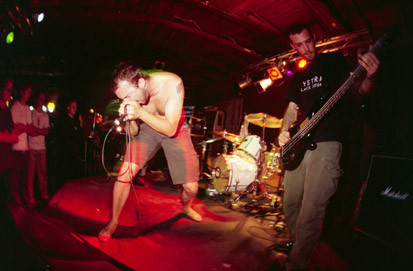 Born in 1994 in Geneva, Switzerland, Knut quickly became one of the most important band in the field of chaotic, uncompromising and forward-thinking math-hardcore. With their best album, “Challenger”, released on Hydra Head Records / Chrome Saint Magnus in 2002, the band toured across Europe and America with bands like Isis, Converge, Botch, Keelhaul, Pelican, Taint and many more. “Challenger” landed on the 17th position in Terrorizer Magazine’s top 40, next to Isis’ “Oceanic”, Mastodon’s “Remission” and Meshuggah’s “Nothing”!

Its follow-up, “Terraformer”, though very different from “Challenger”, was one of the best album of 2005. It was still evolutional and surprising. After having some of their tracks remixed and rearranged by some great names (JK Broadrick, KK Null, Dälek, Mick Harris…) on their 10th anniversary album “Alter”, the members of Knut are releasing their new album “Wonder” this Spring. In the meantime, a new and original vinyl version of their “Challenger” album is going to hit the world’s face through your favourite label, Division Records.