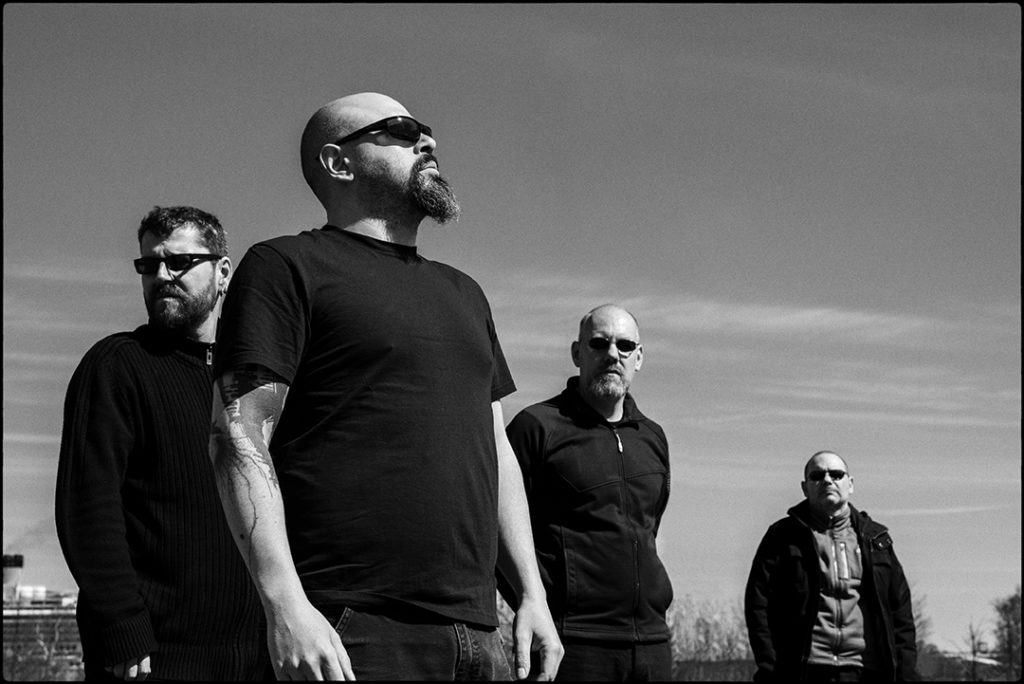 First inclined to industrial tones and shapes somewhat similar to Godflesh, mixed with a touch of 90’s noise (still significant on the inaugural “Down, Last Level”, 1998), the band widens its line-up as well as its sound palette at the turn of the 21st century.

Less mechanical and more organic, heavy and stifling atmospheres follow the lines of corrosive guitars and slow-paced hammerings that subsequently become the core of DIRGE’s music. Predating a genre that would later be christened as post-hardcore then post-metal, the second album “Blight and Vision below” a Faded Sun is released in 2000.

“And Shall The Sky Descend” follows four years later. If guitars remain the cornerstone of the four long pieces that build it, the extremely decelerated tempos and creeping samples mirror months of experimentations on textures, lengths and improvisations. A sonic evolution towards more mesmerizing and psychedelic horizons.

In 2007, the band takes the concept even further with its most daring work, “Wings Of Lead Over Dormant Seas”. An immersive double album in which ambient and tribal power stand alongside massive riffs and industrial volutes.

2011. DIRGE reduces the duration of its songs and injects ethereal brightness, lethargic cold and melodicbreath within the telluric riffs running through its fifth release, the warmly acclaimed “Elysian Magnetic Fields”.

“Hyperion” follows three years after. An album which draws the cold and ethereal vein of “Elysian Magnetic Fields” out, between hazy melancholy and movement variations, powerful as well as progressive. The various keys of vocals (Lycia’s Tara Vanflower is featured on one track) serve wide-ranging compositions, both profound and bright.

2014/2016 is the more active live period for the band (tours, shows, festival) who eventually returns in the studio in spring 2017 to complete arrangements and mixing of a long-planned instrumental project. Released in December as a vinyl EP, “Alma | Baltica” shows the more ambient and abstract side of DIRGE’s music.

Simultaneously, the writing process for the seventh and last album “Lost Empyrean” starts by the end of 2016. Despite a hard and complex genesis, it quickly appears to be the more melodic and sophisticated version of DIRGE, while condensing all the various characteristics of the past recordings. Mix and mastering are entrusted to Raphaël Bovey (Gojira, Impure Wilhelmina…).

In the Fall of 2018, the band tours one last time before releasing “Lost Empyrean” a couple of weeks later. Then splits-up, as intended for months.

Taking advantage of the 2020 worldwide lockdown, the compilation project “Vanishing Point” is rapidly shaped. Once selected and gathered, the rare and previously unreleased songs are mixed (sometimes restored) and assembled during the summer by Raphael Bovey. The 3-CD digisleeve is finally released in March 2021.